Enjoy Your Hobbies without Giving into Pressure! Cosplay Performer Sarami 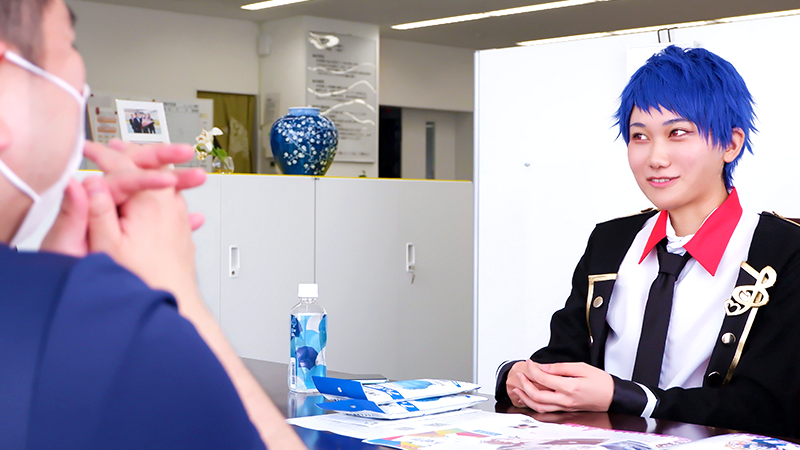 Sarami cosplaying as Shin Ichijo from KING OF PRISM

This is Love! Remembering with Your Body

Sarami is a cosplay performer, which means she dances on stage while in cosplay. After taking a peek at her Twitter feed we found videos of lively, high-quality dances, as if she’d jumped straight out of KING OF PRISM. You can really feel her love for the craft, as if she has dedicated her life to it.

“When I was in school, I used to go to dance practice with my friends, but I was so bad. I always danced at the back of the group where no one would see me. But for most of the videos I put on Twitter, I don’t really practice much.”

We found that hard to believe. There’s no way she could dance so well without practicing! The choreography is almost perfect!

“It’s true (laughs). I just film myself dancing when the studio happens to be open and I feel like dancing. Somehow the choreography comes to me naturally. I mean, I have seen the KING OF PRISM movie about 80 times, I’ll admit it (laughs). And when you participate in fan screenings, when fans get together and dance with light sticks and chant as the movie plays, your body starts to remember the movements on its own. I’ve also watched the anime over and over again. Whatever I can’t figure out from the movie or the anime I make up myself.”

The fact that she’s seen the same movie over 80 times–and that her body just remembers the moves–is a true testament to her love for KING OF PRISM. 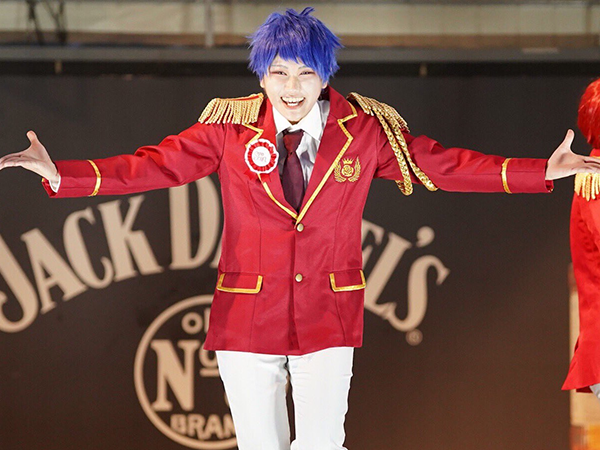 Forming a Cosplay Performance Club in the Blink of an Eye!

Sarami is actually a founding member of the same cosplay performance club that another cosplay performer we interviewed, Makoto, is part of. Currently, the club has ten active members who are often busy performing at different events.

“I wasn’t planning on starting an organization, but we just ended up collecting people. I started out with two friends doing KING OF PRISM performances, but just as we were thinking we wanted to have enough people to perform the whole cast, another KING OF PRISM performer approached us. And then the word spread on Twitter and little by little our numbers increased.”

It sounds like it was easy to find like-minded fans of KING OF PRISM.

“We aren’t that formal of a club, though. I thought if we set rules or scheduled practice days then people would think they have to come. Then what was fun would become work and obligation. Since we started it for fun, it’s fine if we keep it for fun. Cosplay performance is a hobby, after all.”

Typically, the more people you invite to a club, the more limitations there are, and the more you need to instill order. But since Sarami’s group has kept it free of rules, they may have truly created an atmosphere where everyone can just have fun and enjoy the hobby.

“We have fun playing around a lot, and even my cosplay friends outside of the club have said they want to try. For example, we’ve had a bowling competition in costume, and a movie night. Of course we always get permission from the location first (laughs). Oh, one fun thing we did was an escape room-like event. We rented a standalone studio and divided into groups. One group made up riddles and the other had to solve them. It was fun even just assigning roles based on characters!” 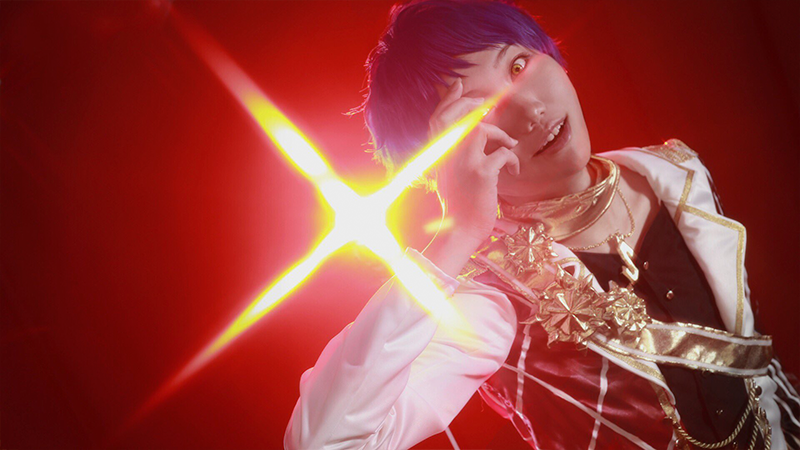 “Watching our favorite characters try to solve mysteries on their own is also fun!”

Not a Doujin in the Beginning

Sarami might be a perfect example of a doujin now, but she wasn’t always. In the past, she said she was just a regular member of society.

“I didn’t have any interest in cosplay or even doujinshi or anything like that. I’ve only been doing cosplay for four years. But I did like to try to imitate the hairstyles of some of my favorite characters, like I would dye the roots of my hair red and stuff. At that time I was running my own bar. I wanted it to be this trendy new bar, but I guess because of where it was located, I had a lot of otaku customers. And because I had the hairstyle of a Love! Live character, customers started giving me goods and posters and stuff, and the special wallpaper I had on the walls eventually became covered in posters. After that, a guy in a band I know invited me to perform on stage, and that was the turning point.”

As Sarami’s ordinary bar gradually transformed into a Love! Live fan fest, so too did Sarami herself turn from an ordinary adult into a doujin. Of course, as it turned out, her first cosplay was also Love! Live.

“Since I’m pretty tall, I have kind of a hard time doing female characters. Plus, even if I work really hard at the makeup, I’m never really sure if I’ve done it right. I worry that I don’t put enough on and it looks weird. So one day I just decided to do the opposite and really layer it on, and my friend said I looked really cool. ‘Why don’t you try doing male cosplay?’ they said. Female characters might eventually be easy for even me to do, but I like male characters, because they’re a different gender altogether and I have a lot of leeway with what I do.” 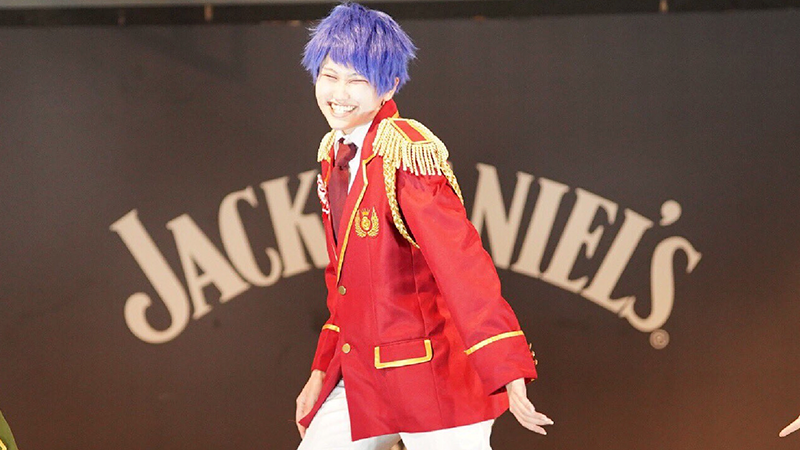 You can’t go wrong with a smile!

Sarami’s specialty is making her own costumes. She even went to school for fashion, so her skills are top-notch. Of course, today’s outfit is as sharp as always.

“Including the costumes I’ve redone, I think I’ve made about 70 altogether. They’re not all for me; I’ve also had some commissions. I’ve even made costumes for the whole club for a cosplay performance event…I made 18 costumes in one go. I definitely regretted that (laughs).”

Just making one costume is hard enough…we get overwhelmed just thinking about making 18!

“I’ve studied fashion, but sometimes cosplay can be totally different from regular clothes. There are some impossible designs that could never be used in normal fashion, so I have to be careful not to hold myself to a fixed concept of what it should be. I have to keep my thinking clear and my mind flexible…In fact, making cosplay might be more like crafting than sewing.”

That’s true. In cosplay they don’t just use needles and thread to create costumes, but also things like double-sided tape. To make the voluminous hairstyles of anime, some cosplayers have even used paper cups. There’s a lot of freedom when it comes to making cosplay. It’s a thrill that only doujin will understand.

“That’s right! There are no rules about how things have to be done in cosplay. You’re free to do it however you want, and to enjoy cosplay performances how you want. The best way is to challenge yourself without thinking too hard about it. Some people stress out because, even though they were doing it for fun, they acquire some fans and then think they have to tailor their cosplay to them. Then what’s supposed to be fun starts to turn into work. That’s why I say that we should be free to enjoy hobbies as we like, that we can have fun without bothering anyone.” 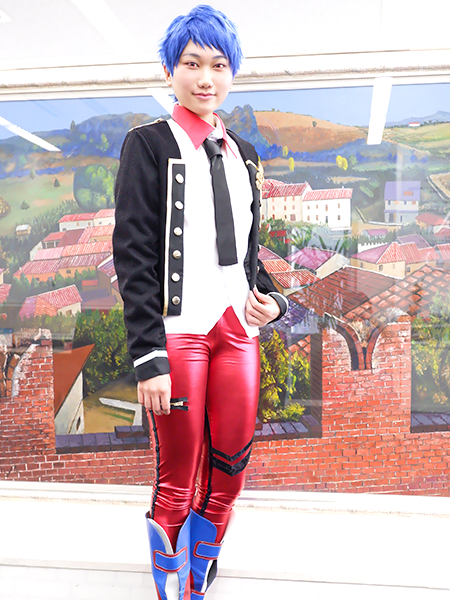 It’s hard to believe this costume is handmade! The quality is what you’d expect from someone who’s studied fashion.