[Cosplayer: Hikaru] “A true narcissist”… But what does that mean?

It’s the 2nd Official Cosplay photoshoot organised by Doujin World! And this man appears… He’s a brilliant star whose light pierces through even the glittering lights of the casino… It’s HIKARU!! The champion of the “What are you hiding” 2020 Cosplay Men’s and Men’s Grand Prix. A king among kings whose presence is incomparable. You must be very popular, right?

HIKARU says, starting to get embarrassed.

“Well actually I have had many people tell me that I am a bit full of myself, but what can I say? I’m a narcissist.”

As expected,you have a very positive perspective.

“It’s not that, I’m a narcissist precisely because I enjoy myself to the fullest. It’s the secret of cosplay really. You have to find a way to love yourself when you’re cosplaying.”

That’s true, there are a lot of people who don’t have confidence in themselves and many find their way into the cosplay world with thoughts of wanting to be cuter or cooler. 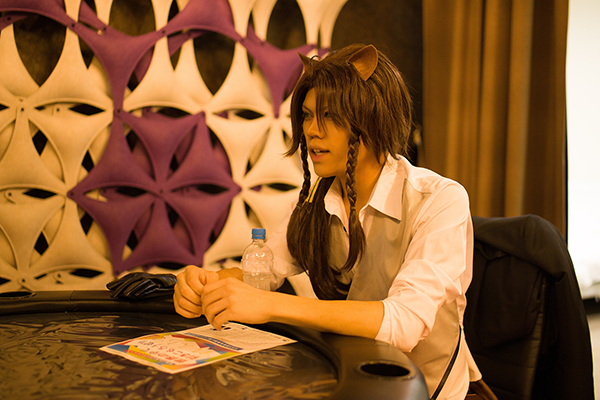 HIKARU chatting about his thoughts on cosplay

I praise myself first

“Well, I transform into the character I really want to be inside. When I put on a costume I say out loud to myself “Wow, I really look cool!”  Even during photoshoots, while I am looking at my pictures I say out loud, “These are great!” Haha!”

Yes, while cosplaying it’s so important to be your own number one fan; that’s the attitude you have to exude. You also seemed to have a lot of struggles when you first started cosplay, right?

“I first started cosplaying when I was in high school. I didn’t really tell my classmates but before I knew it my pictures had really spread on the Internet. And with that people started to talk and there were a lot of rumours going around. In those days male cosplayers were pretty rare, you see. I think that it’s due to that experience that I became a narcissist…”

‘The nail that sticks out gets hammered down’ [Translator’s note: This means it’s difficult to be different, anything or anyone that’s different is met with heavy resistance]

That may be one of the bad sides to Japanese culture, however if you really push through, no one can “hammer” you down!

“I thought that I might as well bring what they were whispering about into the light and show them what it’s really about! So I cosplayed at the cultural festival at school. After that, no one had anything to whisper about and no one said anything to me.”

That’s very courageous. Maybe it’s because that same coolness and spirit radiates thorough in his photos that Hikaru was able to become such a champion in his craft. 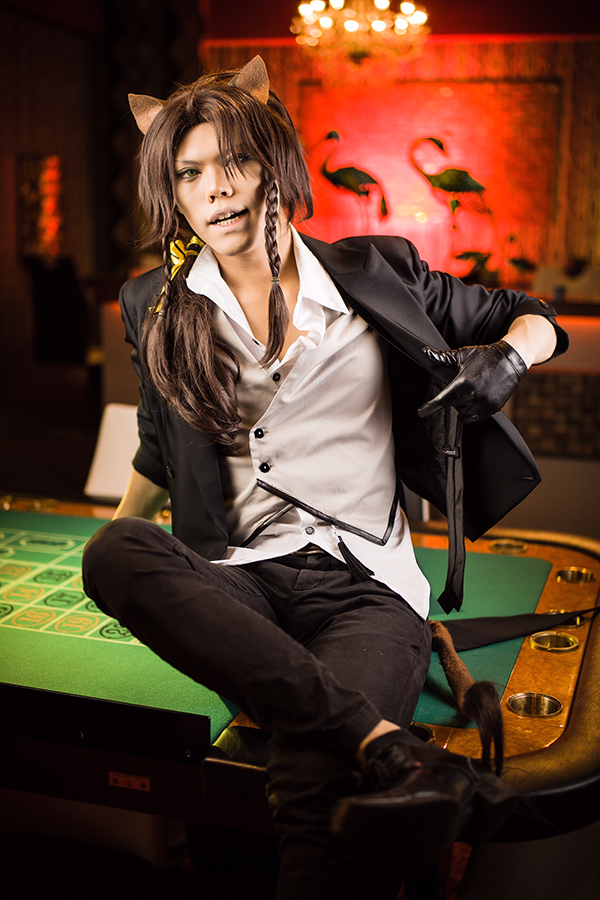 But… He’s not just a handsome face!

“Recently, the number of male cosplayers has really increased. The number of men’s costumes sold as well, and you can choose as many wigs as you want. So now may be the perfect time to start cosplaying. Taking the first step may seem great, however I would like to offer some simple advice.”

Ooh! A bit of advice from the champion himself??

“It’s often said that the world is for the handsome, but it’s not the case at all!”

“Well it’s definitely a good place to draw from if you’re handsome. You may attract a lot of support from the female community. Yes, I was chosen to compete in the Grand Prix however if I wasn’t on point with my make-up that would have been it for me. If you combine commitment, effort, and creativity and really understand the characters that go well with you, anyone has a winning shot whether your competition is handsome or not. Don’t you think that’s fascinating?”

Yes, it’s like you said one’s appearance is only one component of cosplay. If you know yourself and stay true to that, anyone has the chance to become a hero.

“And of course, just hearing that sounds amazing but I really want you all to know you can really find enjoyment in the simple aspects of cosplay as well, things like sewing your costume and picking out the perfect makeup”

For sure, it is still necessary to go through that initial struggle behind the scenes in order to master it, but the feeling of enjoyment that one will get from that and those struggles will further help me grow and improve. Hikaru partakes in various activities besides cosplay now as well. 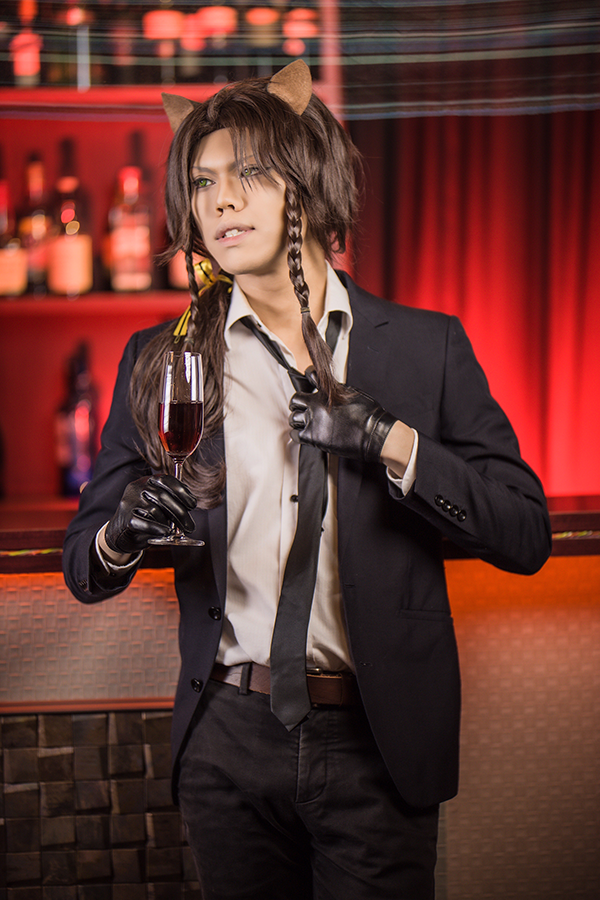 It’s not the wine, it’s the intoxication of his gaze

He established a name for himself known as HIKARU, although cosplay is only one part of that.

“For example, I try to do some live broadcasts without cosplay on. Also, I sometimes post cosplay how-to videos on YouTube. It may seem inconsistent, but it has a purpose.”

True, but I don’t know exactly what you mean just from that statement…

“It would be nice if I could help people who don’t know much about cosplay or are interested in it to take a step forward. On the other hand, for people who know me in cosplay as Hikaru, I want to put out more content for them portraying characters who aren’t “HIKARU”. I think these things bring joy to people who love the otaku cosplay culture, makes them laugh, and sometimes gives them courage. I want to be a person who does that for others.”

Wow! Possessing that desire to give back to the people who supported you along the way to where you are now and the want to contribute to cosplay culture; I expect nothing less from a champion, such as yourself.

“Because I am where I am now, I am able to accomplish many things. However, I don’t just want to limit myself to the title of  Grand Prix Cosplay of the Year. To enjoy myself and spread otaku culture in my own way to the rest of the world is what I consider the true meaning of the term narcissist.” 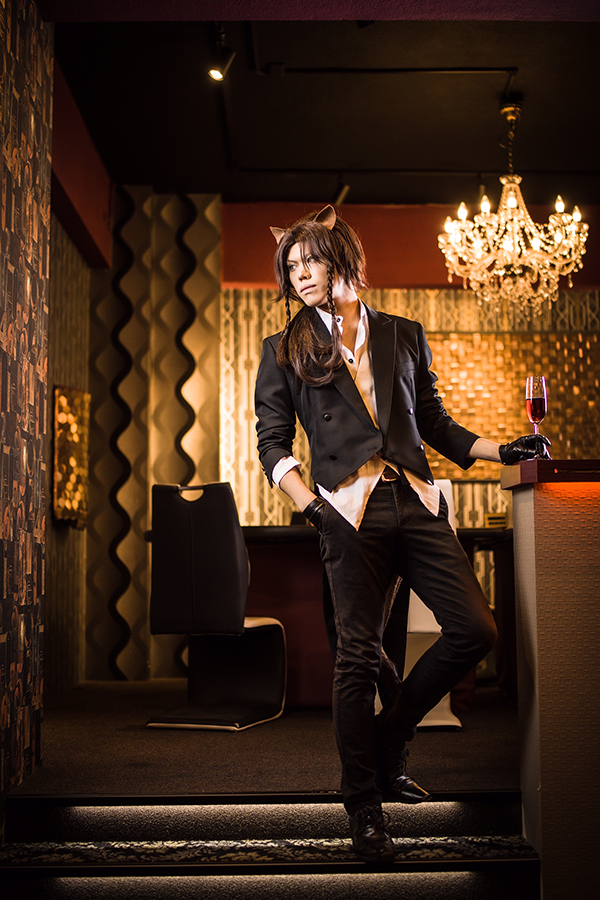 Thank you (HIKARU), for participating in our photoshoot!