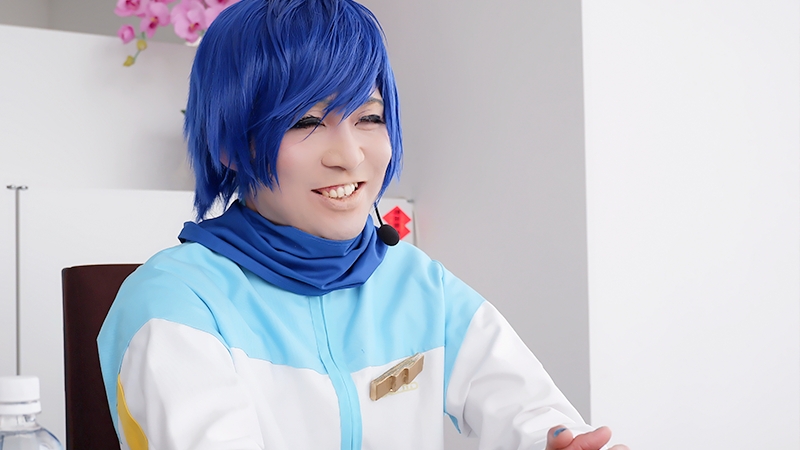 Giving us a refreshing smile that reminds us of Kaito’s most famous song, “Shineba Ii no ni”

Just Putting on a Wig Transforms Him

We were pretty nervous this time around. Not only was this our first male cosplayer interview, but the man who appeared before us was a well-mannered businessman who worked in the financial sector. His ordinary appearance threw us off a little bit. Wait…do cosplayers usually have this kind of stylish aura to them?

We expected him to appear saying, “Heyy! Thanks for waiting! I’m here now!” or “Hii! Were you good while I was gone?”, like KAITO would at one of his concerts. But we were very wrong.

In truth, all he has to do is put on a blue wig to transform into the vocaloid KAITO. With that sparkling smile, you can’t help but want to become his fan. It’s like he’ll break out into the Magical Mirai performance of “Atta-Kaito” at any minute! Our hearts were racing as we interviewed the cosplayer Nasito.

First, we wanted to know what his path to cosplay was like.

“I never had any intention of doing cosplay, actually. But one day I ended up going to a club event with a really good friend. I say ‘club’ but it isn’t the kind of place where business men would go for entertainment and to drink, like a hip hop club. It isn’t the kind of event where people got drunk and hit on girls. It was an anime song club! They played vocaloid music and anime songs. It felt like the kind of place young people would go to in Shibuya or Omotesando, but it was filled with cosplayers and Wotagei dancers. About 100 people were there so the level of passion was through the roof.” 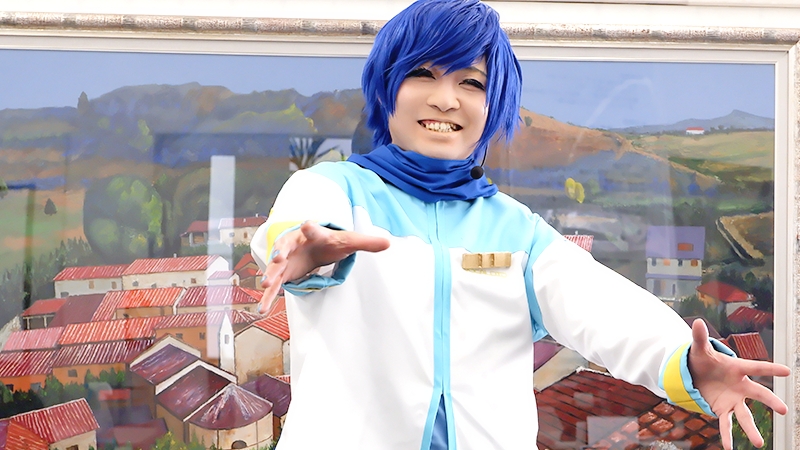 Nasito can change his expression with the snap of his fingers, like transforming into a mean KAITO even when he was smiling a second before

If you go to a place where there are lots of anime and vocaloid fans, the little embers of passion inside you might suddenly burst into flames. It seems that Nasito’s own secret otaku spirit caught alight.

“The first cosplay I ever did was Street Fighter IV’s Dan Hibiki. He’s not quite as strong as the main characters Ryu and Ken…but you can’t hate him (laughs). That was about 10 years ago now. It was four years after that that I started to cosplay as the vocaloid KAITO. Now my cosplay friends basically assume I’m going to do KAITO. Out of my 30 different cosplay outfits, about 10 are KAITO, because he has different outfits for different songs. What I’m wearing now I made myself.”

Though sewing is often thought of as a feminine hobby, that’s not the case at all in the cosplay world. If you want something, apparently you have to make it yourself.

“You can learn how to make clothes on the Internet, and people also distribute patterns for free. There’s something about learning and making something on your own, and putting your hard work into it, that makes you attached to it. Among the cosplays I’ve made, the one I love the most is the armor I made for Adol Christin, the main protagonist of the Ys video game series. Sorry, it’s not KAITO (laughs). I used a soft wood material to make it, but it’s really hard to cut and bend, so I worked hard on it. Because I’ve loved the Ys series since I was a kid, it was very emotional to put it on. They don’t actually sell many costumes from the series, so if I want to wear something I usually have to make it. That’s why a lot of Ys cosplayers are full of passion. On the other hand, there are a lot of vocaloid costumes out there, so they’re a great way for beginners to start out with cosplay.” 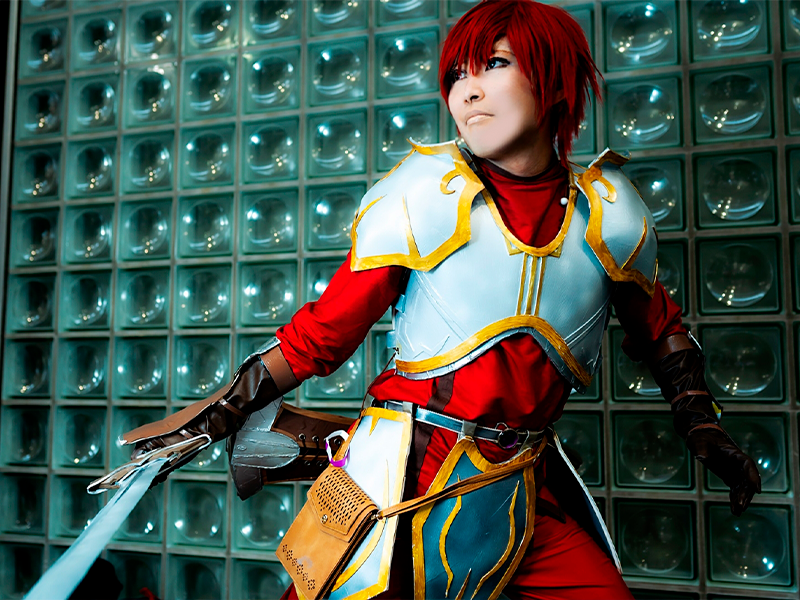 The result of Nasito’s hard work: Adol’s Armor from the Ys series. It looks like very strong armor!

We almost asked how Nasito found the transition from businessman to blacksmith, but instead we asked him how open he is about his passion for cosplay in his regular life.

“Of course I don’t go shouting from the rooftops that I’m a cosplayer. If I was suddenly exposed I might be embarrassed. But it’s not like I’m doing something bad. I like what I like. If I’m asked, I say straight out that I’m a cosplayer. Actually there was this one time I ran into a coworker on the way back from an event, and I was carrying a huge suitcase full of cosplay outfits. I thought, ‘Ah, I’ve been caught’, but they were also dragging a big case behind them…so it was like ‘Wait, are you an otaku, too? Oh..me too.’ (laughs). After that me and that coworker became friends.” 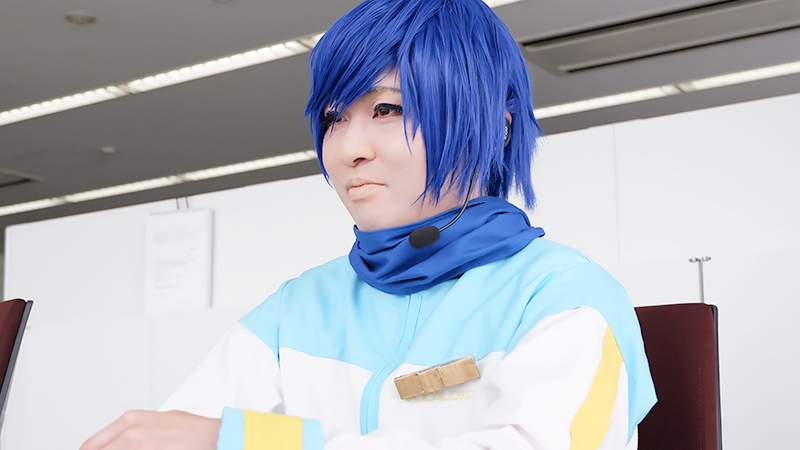 Remembering that day. Fate works in funny ways, doesn’t it?

Before Diving in, Clear up Your Doubts

That was certainly a twist of fate, although nowadays cosplay is becoming more widely accepted in society, and what was once an underground hobby is now becoming mainstream. But at the same time, we can guess that the number of people who want to try cosplay will probably continue to increase.

“I’d like to tell people who are thinking about trying cosplay to just dive in, but they probably can’t, and that’s why they’re hesitating. In that case, I want them to write out their worries. Is it because you don’t have any costumes? Or you don’t know which character you want to cosplay? Once you clear up each of your worries, then you can get started. Diving into something new all of sudden takes a lot of courage, so take it step by step. Then you can actually go to an event and make friends. It’s also fun to do cosplay at home by yourself, but for me, I really want friends to share my passion with. It might make you nervous, but go to an event and ask cosplayers if you can take their photo. They’ll probably happily say yes!”

Making costumes and gaining new friends…just imagining that life of cosplay might get you pretty excited. But one thing that might be hard for men to wrap their heads around is the use of makeup.

“Maybe this goes without saying, but before I started doing cosplay I had never worn makeup. But I looked at the people around me and started trying to imitate what they did. My friends and I also did karaoke parties where we practiced makeup together. Unlike beauty make up, cosplay makeup has very clear and decided ways of doing things, so it’s pretty easy even for men.” 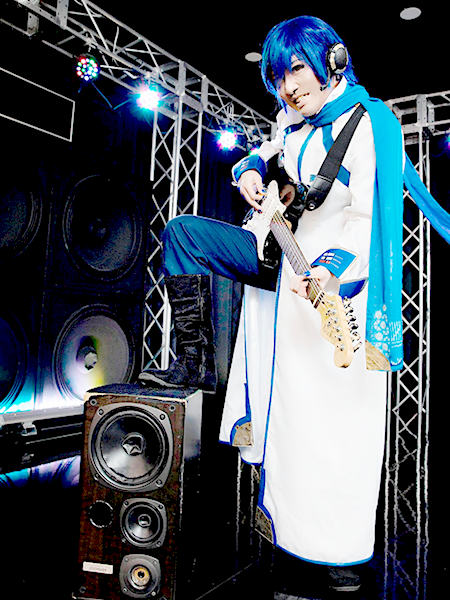 A photo of KAITO that will make you fall in love

Lastly, we have a message that only anime nightclub fan Nasito could send out to the cosplayers of the world:

“To the cosplayers around the world, please come to Japanese events and cosplay with us! I also plan to go to overseas cosplay events someday. When we meet up, let’s party and drink and sing and have a good time!”