Definitely Not an (Outward) Ojisan

Today’s interview is with the cosplayer Natsume. Based on what we learned from our sources, we believed with a decent amount of confidence that Natsume was an ojisan. (“Ojisan” is the Japanese word for middle-aged man.) Of course, we at DoujinWorld don’t discriminate based on race, gender, age, sexual orientation, or any other factor, so we didn’t mind. But still, we can’t help but make assumptions, since that’s what humans are good at. I mean, Natsume’s Twitter title is “Natsume Ojisan” so…we assumed we were meeting with a middle-aged man.

At least until a high-pitched voice rang out throughout our office at our arranged interview time.

Huh? Maybe Natsume’s girlfriend came along to announce him?

“Thank you for inviting me today!”

Her voice was like flowers blooming in our messy office, and as it turns out, that voice belonged to Natsume herself.

Natsume is definitely not an ojisan!! 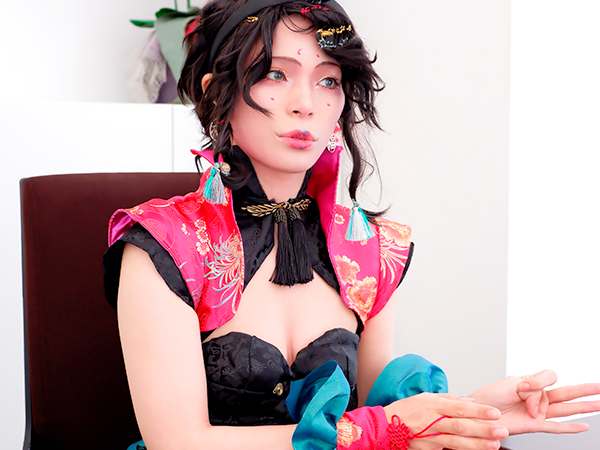 Natsume earnestly answering our questions. Even though she calls herself an “ojisan”, I don’t think she’d never say a dad joke.

Natsume quickly changed into her costume, and it was also not of an ojisan. Rather, it was of a sexy bunny in a Chinese dress-like outfit. It was a great cosplay, but why does she call herself an ojisan?

“Hahaha, sorry I confused you. We did only communicate through Twitter, didn’t we? I have always liked content made for men, like Tsukihime and Fate, so that’s why I call myself an ojisan. I’ve played ero–I mean, bishojo games, for a long time. I started around my first year of high school. When I noticed there weren’t a lot of people around me who liked the same thing…well, that’s when I realized I was an otaku.”

“Around the same time, I learned about Comiket. I told myself that as an otaku I had to go at least once! But I couldn’t really go alone, so I ended up waiting for a year. Then in my second year, I happened to meet an otaku classmate.”

The embers of an otaku’s oshi can grow into an explosive flame if combined with another’s. Soon after that, Natsume made her cosplay debut at her first ever Comiket.

“My first cosplay was Zetsubo-sensei. I had always loved the anime, and he was my favorite character.”

Today’s cosplay is in a completely different direction, isn’t it? 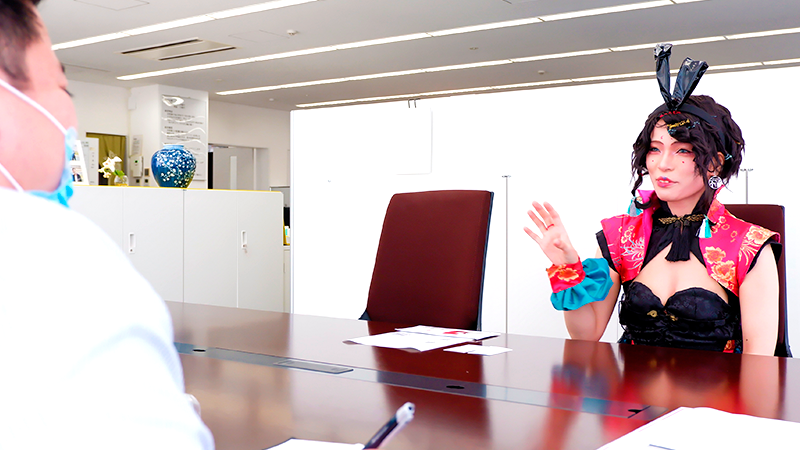 Cosplay ideas born from her abundant knowledge of history

“Actually, I made today’s outfit myself. I’m a history buff; I really like history. I especially love the Muromachi period of Japanese history. It was a time when people rebelled by wearing flashy, stylish clothes. They were called basara people, said to have basara spirit…”

Hold on! When an otaku gets into talking about their specialties, we bystanders often get swept away by the tsunami of their fanaticism, so I had to interject to keep from getting too off topic. But I do admire how much pride she has as an otaku.

“Sorry! I got a little off topic (laughs). Today’s cosplay is not based on Japanese history, but Chinese. It uses the 1920s modern girl as a motif. I designed it based off of the Chinese dress known as the qipao, especially the collars.”

Interesting. We often think of this kind of Chinese dress as having stiff, closed collars, but Natsume’s are more open. Was it easy to buy such an outfit?

“Most of what I wear I make myself. I use patterns to make them from scratch. Today’s outfit took me about a month. I worked so hard on it that I dozed off in the middle of sewing a few times. I had never done any more sewing than what I learned in my elementary school home ec class, so…”

That’s surprising! I thought her fabrics looked very solidly put together, so I would have guessed she’d purchased the costumes whole.

“I even sewed on this purple lining myself. I make everything but the small, difficult items like accessories. I also arrange the wigs to make them align with the trends of the era.”

What an otaku! As expected of a history buff. Her dedication is impressive.

“Up till now I’ve created about 10 original costumes. If you include costumes of copyright characters, I’ve made about 30 to 40 total. I have costumes for Touken Ranbu, Fate, which has been one of my favorites, as well as Vocaloid singers….”

Wow….that’s quite a number. Not to mention, many of her costumes are “roshutsu-kei”, or revealing, costumes. 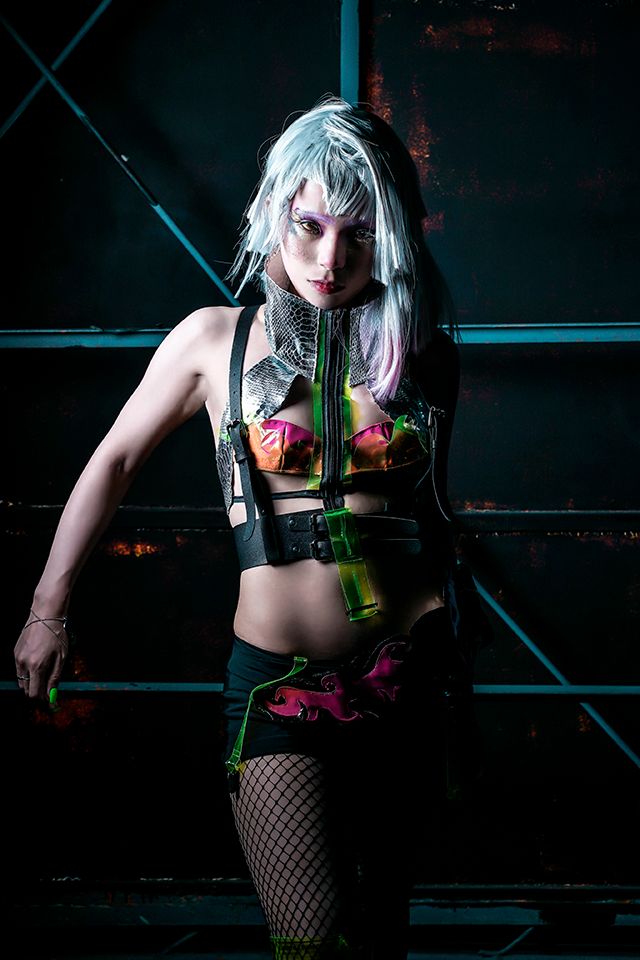 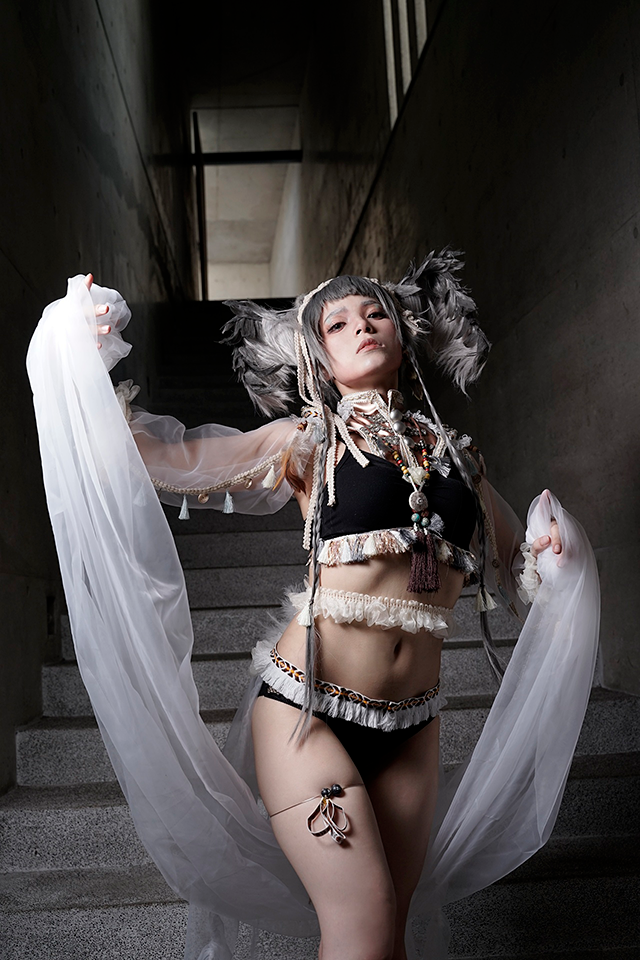 A costume inspired by the gyrfalcon. The level of expression and design is impressive!

Consulting Her Inner Ojisan about What She Should Wear

“I’m like an ojisan at heart, so dressing this way appeals to me. But though I might think like a middle-aged man, I’m still a woman, so I have to work around that too. For example, Comiket has guidelines on exposure in costumes, so I make sure to follow those rules.”

I’ve participated in Comiket as part of a club before, but I never knew there were rules about that. It’s definitely important to know if you’re a cosplayer!

Natsume has also connected with international otaku via Twitter, and has even become close friends with them as they play online games together. She told us about some differences she observed in the way international cosplayers think.

“For better or worse, Japan might be a bit of a perfectionist society. A lot of Japanese cosplayers specialize in creating their costumes from head to toe, but international cosplayers consistently seem to focus on having fun first. I feel they tend to value enjoyment more than seeking quality. To me, cosplay is like a buffet. I can choose what kind of makeup I want and what I want to wear, which is fun in itself, like the best kind of make believe. I can become my favorite character, recreate my favorite scene in pictures, and then I have photos to remember them by. What more could I want?”

We hope that Natsume, with her inner ojisan and her outer female persona, can continue to dazzle the otaku of the world with her amazing cosplay. 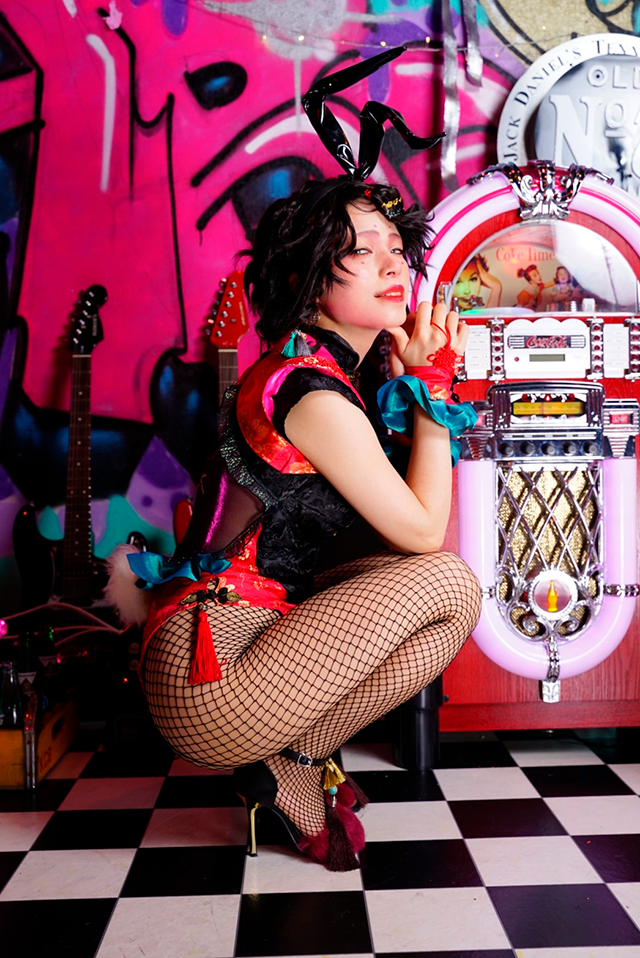