Doujinshi: I Want to Draw Manga Too!

Purely Interesting to You

After you’ve learned about doujin culture, don’t you feel like you want to draw manga too? Of course, the authors of doujinshi manga felt the same way. Every night their ideas grew wilder and wilder, and they traveled to a world of their dreams, creating interesting stories and cool characters. They must have thought that, if they could just turn those dreams into reality, the world around them could change.

Doujinshi are books created by a person or a group of people based on their interests, preferences, principles, opinions, and/or beliefs. They’re not meant to be exchanged for money or to make a profit. They’re simply an expression of what’s in the creator’s heart. Where else would you find such pure, genuine work?

True, the closest thing to that might be comics doodled by elementary or junior high school students in notebooks. Those pictures and stories are created in whatever way their creators want. But as we get older we start to realize that we have limits, and begin to give up on our dreams and lock that form of our self-expression away. But…if you go to Comiket and come face to face with the people drawn to doujin culture, you’ll surely think,

“I want to draw manga too!” 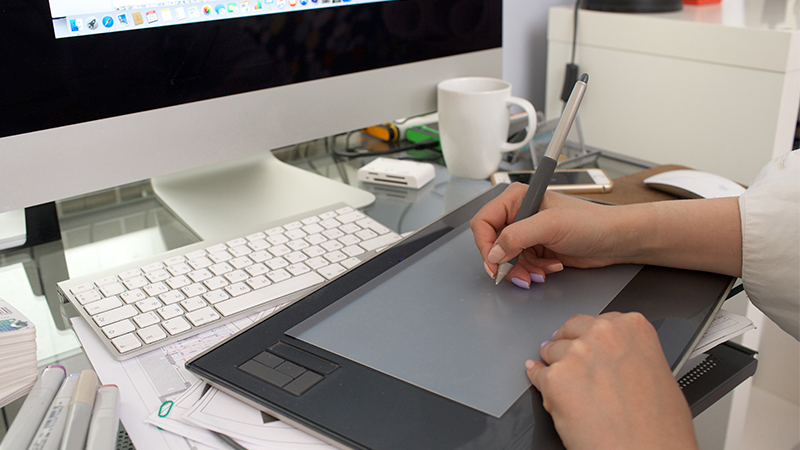 Not too long ago, in order to draw manga, you would have to buy pens of various kinds, ink, draft paper, rulers, screen tones, and a whole host of other things. That was the analogue age. Nowadays, everything is becoming digitized, so you could say that the hurdles of drawing manga are much lower.

The first thing you’ll need is a computer. Where possible, a high performance PC is preferable, but you don’t need some kind of super computer. For example, in order to run the popular design software CLIP STUDIO, you just need a computer that has a Windows 7 or better operating system, a Pentium 4 processor, and two or more gigabytes of RAM. These days it would be hard to find a new computer that doesn’t have these capabilities. However, these are just the minimum requirements for CLIP STUDIO, so some doubt that a computer with basic specs would really be able to run a graphic editing program smoothly.

Even so, you don’t need a crazy powerful computer to get the job done. Once you’ve got one that’ll do the trick, you only have to pay a monthly fee of US$0.99 to use CLIP STUDIO, which is a professional-grade software.

Next, you’ll need a pen tablet, which is kind of like an iPad. There is a whole range of pen tablets out there, from ones with LCD screens to those that just look like a black board. As laymen, we have a tendency to think the most expensive brands are best and the cheap ones are a waste of money, but Wacom’s Intuos S is a perfectly good pen tablet that is available for just $79.95, and it comes with a license for CLIP STUDIO, too.

If you dream of drawing your own manga, give it a try! Why not make your own contribution to doujin culture?