“Cosplay Helps You Love Yourself More”: Hanon the Cosplayer 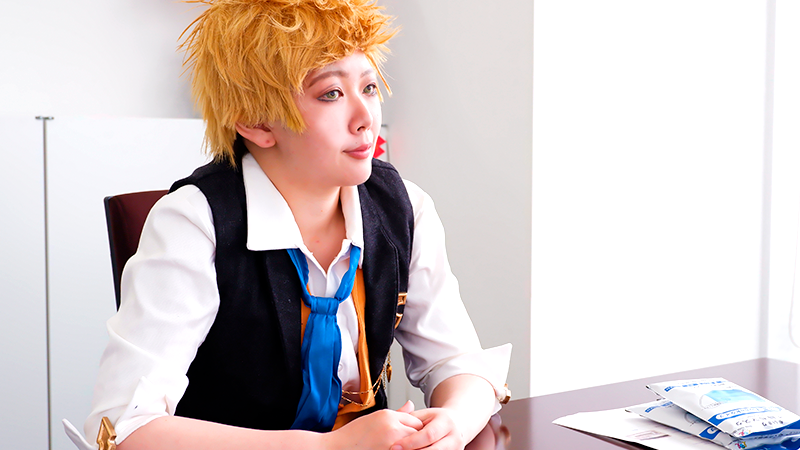 So handsome! Vane from Granblue Fantasy…or is it?

Today, cosplayer Nasito, who appeared as the Vocaloid singer Kaito in our interview, has passed the baton to the equally talented Hanon!

Is it a coincidence that they’re both good-looking people? When Hanon came to meet with us as Vane from the Granblue Fantasy series, we couldn’t help but admire him. He looked as if he’d swoop in and defend us from all the wrong in the world, like when we’re getting yelled at by the boss, or when the company is in trouble. His gaze is dauntless, and being under it made us stand up straight and proud with him.

Then he beamed at us and said, “Nice to meet you! *sparkle*”

That’s when we remembered that Hanon is a woman!

Hanon is a cosplayer who primarily wears costumes of video game characters. Today she came as a male character from Granblue Fantasy, but of course she also does female characters from other games like Persona and BLAZBLUE too.

“Since we had to stay home during Golden Week this year, I spent the whole time playing video games. I love Final Fantasy so I picked up the 7 remake and dove into that. I especially love RPG and fighting games, even though I’m not really that good at them. But that’s why a lot of my cosplay is based on video games. I do have some anime costumes, but I have about three times as many video game costumes. Lately I’m really into Granblue Fantasy!” 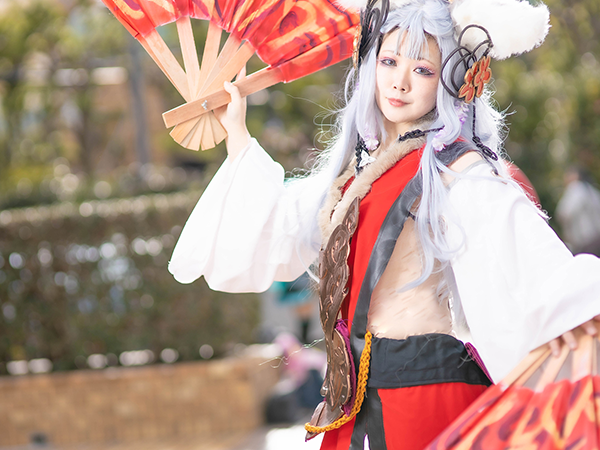 Naturally video games are the best way to spend a long staycation! You actually have the time to really immerse yourself in them, and don’t have to worry about getting enough sleep or oversleeping for work. But everyone in Japan did get a 100,000 yen stimulus check, so you kind of do want to use it to travel somewhere, don’t you?

“That’s true. I’ve been talking with my friends about going to international cosplay events lately. International cosplayers are really proactive about coming to Japanese events. I want to travel and do some sightseeing while in cosplay!”

Enjoying cosplay across the sea while exploring a foreign culture…there’s no better way for a cosplayer to travel! So we asked Hanon if she planned to use her stimulus check to go on vacation once the coronavirus situation has settled down.

“I thought, ‘No better time than now!’ and immediately designed some new cosplay…”

When we asked, we learned that Hanon primarily has her costumes tailor-made just for her. That’s why they cost so much.

“From the fabric to the sizing, I have everything made for me. I’m not very good at sewing…so I search for people on Twitter who will do it for me. Industry professionals are good too, but working one-on-one with a designer lets you find people who like the same characters you do. If they like the same character I like, then they’re sure to understand what I want without me having to explain too much. But I do make my own weapons. I want to make them a perfect fit for me.”

Costume-makers undoubtedly have the ability to make high-quality products regardless of the subject, but if they have a love for the subject as they make it, the final product has an irreplaceable additional value. When love is added to the picture, it’s not just a business exchange. Love is an extra spice that ups the quality of Hanon’s costumes. So what kind of cosplay does she do?”

“Actually…I tend to like characters with a lot of skin mileage.”

Skin mileage? That’s the first time we’ve ever heard that phrase, but we understood it right away. In other words, a character whose costume to skin ratio is low!

“That’s right (laughs). It’s not like I love showing skin, not like I want people’s attention. It’s just a lot of the characters I like wear revealing clothing. Especially in fighting games! They all wear clothes that have no regard for self defense, don’t they?”

“At photoshoot events, male photographers sometimes ask me to do unreasonable poses. I’m always like, ‘Wait a second, no. This character wouldn’t pose like that.’ But it can be hard to look them in the eye and refuse, so most of the time I just pretend I don’t hear them (laughs). Anyway, since it’s cold in winter, this year I’m aiming to expand my cloth mileage!” 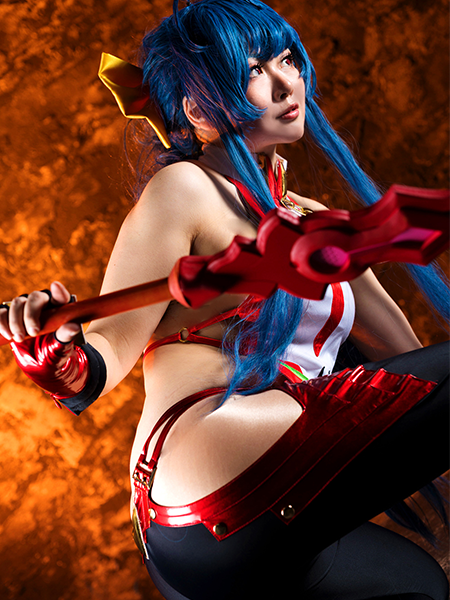 Hanon with one of her handmade props. You’d be surprised by how detailed they are!

Hanon’s photo collection books are on sale now! Check out her Booth shop!

Finding Cosplay Not through Anime but through a Real Celebrity

Though Hanon’s primary subjects are video game characters, it was because of a real celebrity that she ended up starting cosplay.

“It was when I was in junior high school. There was a singer I loved, and I went to their live concert for the first time. I was amazed by the atmosphere of the show, but what really shocked me was that everyone in the audience was wearing that artist’s outfit. It’s not an outfit that anyone would normally wear, so I was shocked.

“After that I started to do cosplay of that singer. I only started doing anime and video game cosplay when I became an adult.” 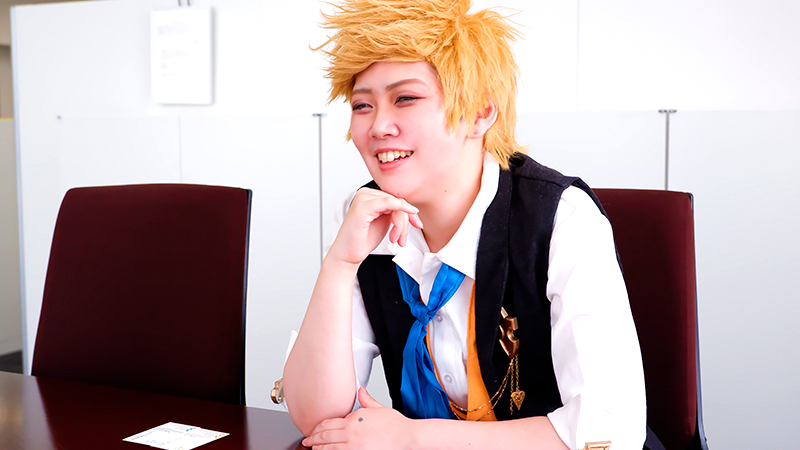 Looking back on her first encounter with cosplay.

The world’s biggest doujinshi selling fair might be Comiket, but Comic Con is the biggest event for anime, manga, movies, and all other kinds of pop culture. It was founded in the U.S., and has big names like Apple’s cofounder Steve Wozniak associated with it. Hanon happens to volunteer as a member of the staff for Tokyo Comic Con every year.

“It’s held every year for one or two weeks in December at the Makuhari Messe Event Hall in Chiba. Lots of cosplayers come, so I help organize the line for the changing rooms and assist in hosting the contests. Since it’s a convention for anime and comics, there are also a lot of international guests, too.”

What she realized as a volunteer at Tokyo Comic Con was that there’s a pretty big difference in the way Japanese and international cosplayers enjoy the hobby.

“International cosplayers always look like they’re genuinely enjoying themselves. There are both those who don’t concern themselves with the small details of their cosplay, and those who look like they might be super serious and have their own workshop at home (laughs). But everyone seems to be enjoying it as a form of entertainment. On the other hand, there are a lot of Japanese cosplayers who seem a little high-strung. They worry about maintaining a high level of quality, or getting likes on social media. They end up unknowingly creating hurdles for themselves. I myself also have times like that. But after observing international cosplayers, I’ve started to think that I’d rather put all my energy into having fun!”

Nowadays social media is a double-edged sword; on the one hand, you can easily share your activities with others, but on the other hand you can also easily keep track of others. Even if you try not to, you can’t help it. That’s why it’s so important not to let other people ruin your fun!

“Cosplay helps you love yourself more. That’s why I want to put all my energy into having fun!” 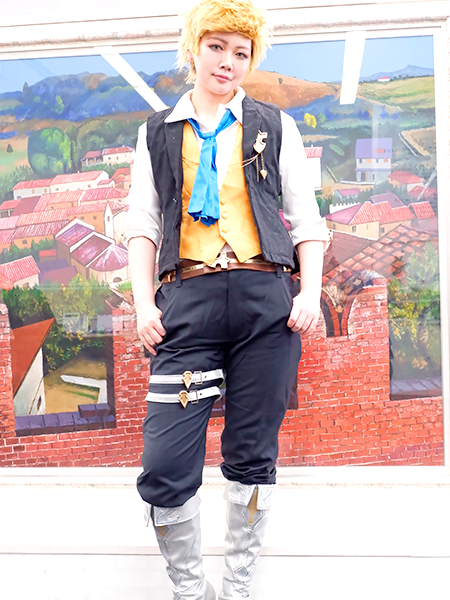 She would be an example to us all!